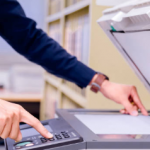 “YOU ARE just lazy!” So says the conventional type of people who addressed such statement to those who depended on what technology can do.

Technology has been a rapidly changing branch of knowledge where people continuously invent and innovate machines that make things easier. With the help of technology, performing tasks became faster and simpler for people. Furthermore, it helps us save time and energy from doing repetitive tasks machines can already do.

While the conventional generation sees the use of technology as a form of indolence, the contemporary generation, on the other hand, believes that it is about promoting productivity. Hence, the technological innovation of the copier is one example.

In the pre-computer age, people used to suffer from wrist pains caused by repetitive copying of texts to produce many copies of one document. However, with the invention of the copier, replicating and reproducing documents becomes easy as a pie.

Nearly 240 years have gone since the first launching of copiers back in 1778, yet the millennials have already taken the machine’s huge contribution to the printing industry for granted. Nevertheless, copiers are still one of the cheapest and most efficient ways to reproduce printed materials, and not to mention, its accessibility and availability are not a problem.

Now, these machines are also up for lease and rent to accommodate those with short-term printing needs. Moreover, copier repair services are also provided to save those dysfunctional ones. All these have been made available for the complete satisfaction of those with printing device concerns.

Normally, everyone living in the computer era may find a copier’s existence ordinary, even call it an “old” machine, but isn’t it good to know that because of this so-called ordinary equipment, reproduction of print materials in the industry would not cause anybody sore wrists and poor productivity anymore?

If your location is around Miami, you may also visit Copier Rental Miami