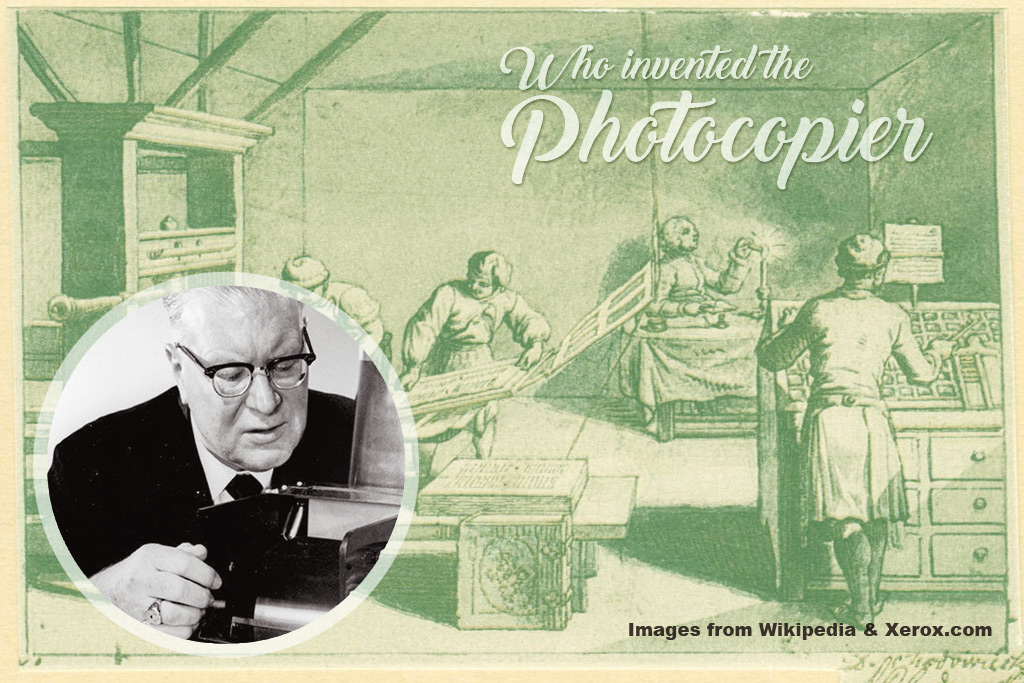 Chester Carlson and the History of Photocopiers

Photocopiers were invented by Chester Carlson in 1938. Carlson was born in Seattle on February 8, 1906. Even as a young boy, he had always been curious about how things work. He was especially fascinated with Chemistry. Back when he was a teenager, he used to work for a local printer. Carlson used this opportunity to publish a little magazine for amateur chemists.

After graduating from high school, he worked his way through college where he took up Chemistry. A few years later, he entered California Institute of Technology where he graduated with a degree in Physics. Carlson also earned a law degree from New York Law School while working at an electronics firm called PR. Mallory & CO. Over the years, he got promoted and became a manager at Mallory’s patent department.

While working in New York, Carlson noticed that they were wasting so much time and money in creating carbon copies of documents. This made him want to come up with a more practical way of copying documents. For many months, he worked on his research and conducted experiments in order to create a device that could generate copies with the just the push of a button.

The principle behind Carlson’s invention was called electrophotography. Later on, he began calling this process xerography. When he was finally able to create a copy machine, he approached several companies, hoping that they would help him improve his invention, but they all turned him down.

Fortunately, Carlson did not give up on his dream. In 1944, he found a non-profit organization that was interested in his work. Battelle Memorial Institute signed a royalty-sharing contract with him and helped him develop his device. In 1947, they entered into an agreement with Haloid. This photo-paper company eventually became known as Xerox. With their help, the first automated copy machine came out in 1959. This invention turned out to be a huge success.

In 1970, Xerox introduced a photocopier that could print on both sides of a sheet of paper. This invention significantly reduced the amount of paper used for copying documents. Color copiers were also invented in the 70s. These copiers worked the same way as black and white photocopy machines.

In 1979, Xerox introduced.copiers with a time-saving feature. They machines came with an automatic feeder, which allowed users to place a stack of papers in the photocopier instead of placing each sheet individually.

Xerography has become the foundation of the copier industry, including Xerox and other corporations. The phenomenal success of his invention made Chester Carlson a multimillionaire. He also received numerous awards for his pioneering work, including the Inventor of the Year in 1964 and the Horatio Alger Award in 1966.

The Impact of Chester Carlson’s Invention

Before Chester Carlson invented the photocopier, there were four ways of copying documents: by hand, carbon copies, pictures, or mimeograph. These methods were not cost-effective and proved to be time-consuming especially when companies needed thousands of copies of the same documents.

Nowadays, photocopiers can be found everywhere, from offices to schools and convenient stores. Many companies have also entered the market by creating cheaper and more efficient devices. Today, photocopiers come with a wide range of functionalities that can help improve any business. However, these machines still operate on the same principle as Chester Carlson’s original design.